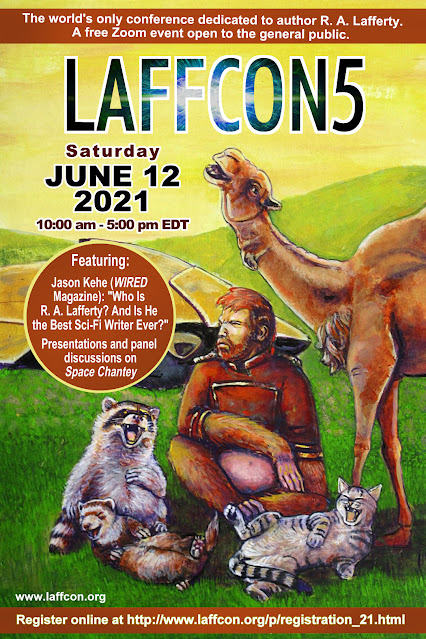 “I am not alone?” Gee wondered aloud. “There are oth­ers and they dis­cuss? Well, if we've got to have con­ver­sa­tion, let's agree to keep it in­side the frame. Oh, hello, Zee!”
“My name is Zed, for so it is called in the old coun­try. Let's keep the frame mov­ing, Gee, and any­thing we wish can be in­side it. Look at any­thing through a frame, and it's a strik­ing pic­ture. There may be other frames, but we are lim­ited to our own: space, time, mo­tion, mass, and the viv­i­fy­ing prin­ciple, known to us through con­scious­ness on its sev­eral levels, by means of the senses and para­senses, and aided by less than a dozen styles of thought. It's lim­ited, but it's all we seem to have.”
"Symposium", R.A. Lafferty

LaffCon5 is officially happening. Register here. Seriously, register now. If you do not register, you will not get the event link sent to you.
Event link? Well, yes. This year's LaffCon will be online. June 12th, 2021
There are admitted downsides to this. There will be no art gallery. There will be no free lunch provided by the Friends of the Library. There will be no hugging and hand shaking and no awkward group photographs. The immediacy and intimacy of talking closely with friendly fellow fans will be absent.
Alas, due to the ongoing world situation, it has to be online for now.
It's not all downsides. An online event has real advantages that an offline event does not have. We are able to collapse the distances between one another! All of the guests will be able to make it without any difficulty because they won't even have to leave their own homes! And you won't have to leave your home either. This is the year that you can come to LaffCon in your pajamas! Another advantage is that the online streaming part of the con will be much better this year (I'm too embarrassed to even go back and look at our earlier efforts) since the streaming will be the Con! There may be some technical glitches this year, but we're expecting everything to go smoothly. Another positive is that if this goes well, this could be the beginning of an online Lafferty media empire; why let Gene Wolfe have all the great podcasts?
Gregorio has done a ton of work behind the scenes organizing this year's event. Here's the schedule:

10:00 AM – 10:45 AM John Ellison: Lafferty, Addiction, and Ignatian Spirituality
11:00 AM – 11:45 AM Daniel Otto Jack Petersen: Lafferty As a Bioregional Writer of the Great Plains and Southwest
12 Noon – 12:45 PM Lunch Break
1:00 PM – 1:45 PM Gregorio Montejo: Lafferty, James Joyce, and Homer’s Odyssey
2:00 PM – 2:45 PM Space Chantey Panel Discussion: Andrew Ferguson, Daniel Otto Jack Petersen, Kevin Cheek, Gregorio Montejo
3:00 PM – 3:45 PM Publishing Lafferty: A Roundtable Discussion: Chris Drumm, Greg Ketter, Bryan Cholfin
4:00 PM – 4:45 PM Jason Kehe: Who Is R. A. Lafferty? And Is He the Best Sci-Fi Writer Ever?
That's an amazing line-up.
Why should you care about any of these people? Besides that they're all glowing geniuses?
Here are their Laffertian bona fides:
John Ellison, Gregorio Montejo, Daniel Otto Jack Petersen, and Andrew Ferguson are the Department of Lafferty Studies.
John Ellison
Some Notes on Play, Time, and Catholic Social Teaching in R.A. Lafferty
Exploring Themes From Catholic Theology in Two Short Stories by R. A. Lafferty by
Excerpt from a Thesis
One Cannot Give Too Many Instances
Graced Narratives: Themes of Gift and Will in R.A. Lafferty
Some Notes on Culture and History in R.A. Lafferty’s “Selenium Ghosts of the Eighteen Seventies”
Gregorio Montejo
Aeviternity: R.A. Lafferty's Thomistic Philosophy of Time in the Argo Cycle
“This Was More Than a Spectacle, More Than an Illusion, It was a Communicating Instrument”: R. A. Lafferty and Hans Urs von Balthasar on the Relational Form of Being
Eudaimonism in R.A. Lafferty’s Aurelia
“There Are Three Ways to Open a Secret Door”: R.A. Lafferty’s Bricolage Aesthetic
Daniel Otto Jack Petersen
The Epic of Man and His Friends or Slumming It With the Ontic Outcasts or May Our Eyes Be Big Enough To Take In the Nine Hundred Percent Gain in Everything!
Valery’s Really Eyes and the Parade of Creatures
Lafferty and His Monsters - Part 1: The Early Works
All of the above essays can be found in Feast of Laughter, which is the passion project of editor Kevin Cheek, who deserves all of the praise you can possibly give him.
Also, please see Daniel's academic work:
Ecomonstrous Environments in the Fiction of R. A. Lafferty and Cormac McCarthy
Cowboys and Indians… and Cthulhu! Ecomonstrous Encounters in the Fiction of Cormac McCarthy and R. A. Lafferty
‘You Are the Old Entrapped Dreams of the Coyote’s Brains Oozing Liquid Through the Broken Eye Socket’: Ecomonstrous poetics and weird bioregionalism in the fiction of R. A. Lafferty (with a comparative reading of Cormac McCarthy’s Blood Meridian)
Andrew Ferguson
Lafferty and His World
LoA Intro to Past Master
and other brilliant essays in FoL and other places
and some day the critical biography
Everyone should spend days reading Andrew's Lafferty blog and Daniel's Lafferty blog and Kevin's Lafferty blog.
Chris Drumm, Greg Ketter, and Bryan Cholfin all published Lafferty in the past at a time when the "major" publishers had stopped caring. We owe each of them an enormous debt. Time has revealed that these men were the true Major Publishers That Mattered.
Drumm published: Four Stories, Laughing Kelly and Other Verses, Heart of Stone, Dear and Other Stories, Snake in his Bosom and Other Stories, It's Down the Slippery Cellar Stairs, My Heart Leaps Up, and more
Greg Ketter published: Golden Gate and Other Stories, Through Elegant Eyes, Half a Sky, The Flame Is Green
Bryan Cholfin published: Sindbad: The 13th Voyage, Lafferty in Orbit, and stories in Crank!
Jason Kehe wrote the best introduction to R.A. Lafferty published this year (ranked up there with the best published from any year). Check it out here. Jason Kehe has also written a lot of other smart stuff found here: https://www.wired.com/author/jason-kehe/
You've read this far. Have you registered? Do so now!
Posted by trawlerman No comments:


We wanted to make this decision early enough for everyone to have time to adjust their plans. Now you have 14 months to prepare your talks.

Stay safe and be well, everyone! See you in New Jersey next year.

Note: this is a new location, about 15 minutes northeast of the library in Lawrenceville.

Create Lafferty-inspired artworks for the gallery.

Invite your friends and family.

Planning begins for LAFFCON5, due to take place June 13th of 2020.
Posted by Anthony Ryan Rhodes No comments:

Over at ClayTempleMedia, G.L. McDorman and Brandon Budda have shared the audio they recorded during LAFFCON3 and LAFFCON4. Also available from that page is the text for Matt Keeley's speech titled "Lafferty in New York: The Impure Science of Publishing," delivered at last weekend's event.

The live podcast Glenn and Brandon recorded for The Gene Wolfe Literary Podcast (recorded at LAFFCON4) focusing on RA Lafferty's short story "Nine Hundred Grandmothers" will be posted to their website in the near future. 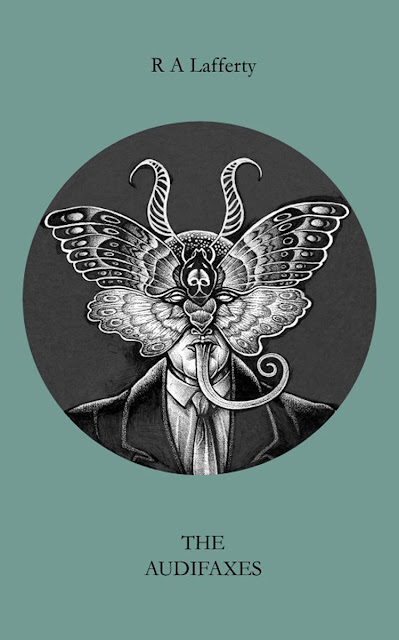 LAFFCON3 was held on June 9, 2018. The "swag" that year gifted to each attendee was something truly special, a limited print booklet collecting short pieces R. A. Lafferty wrote for the Oklahoma Science Fiction Writers' newsletter Son of the Great Pagoda Insurance Company (or Son of the GPIC).

Credit goes to John Owen, who meticulously retyped the text from scanned photocopies of faded newsletters, Warren Brown for introducing the collection, and Gregorio Montejo and Anthony R. Rhodes for providing front and back cover illustrations.

Now, thanks in no small part to the generosity of the Locus Foundation, we have permission to share the digital version of this booklet online with the public.

We hope you enjoy it as much as we do.

The annual celebration of science fiction author R. A. Lafferty returns June 12, 2021. LAFFCON is a free event and open to the public. This year's conference will be held online via Zoom. Register now.

Hosted by the Northeast Lafferty League